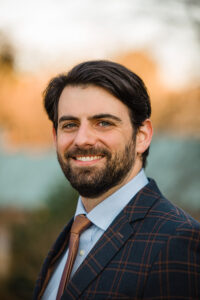 Timothy Shea spoke on the current development behind the “Spatial Antiquity Lab,” which aims to be a permanent space dedicated to research and teaching in spatial humanities and focused on the study of ancient cities, urbanism, and regional cultural landscapes. As an example of the projects the lab could support, he discussed his current research, which studies spatial distribution of tombstones to identify how cemeteries were organized and how people were honored after death. After systematically mapping the location of every tombstone in an Athens cemetery in ArcGIS Pro (UNC Software Distribution), Shea spatially organized his dataset by qualifiers such as inscriptions, dedications, heritage of the deceased, and materials used in construction, and was able to discern that immigrants from the same regions buried in close proximity to one another. Shea created a parallel database to visualize the originating locations of the immigrants and the locations of their tombstones, which allowed him to further understand the experience of these immigrants and their communities — questions that could not be asked without the use of spatial analysis. Shea finished his talk by stressing the importance of collaboration, human connection, and the free-flowing exchange of ideas in research, both inside and outside the university.