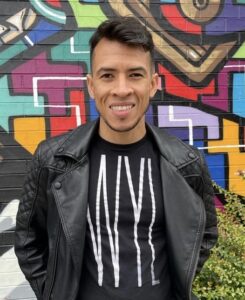 Andrés Hincapié discussed his research project, “Entrepreneurship in Black and White: Life Cycle Differences in Entrepreneurship between Black and White Males,” which aims to examine the various mechanisms and decision factors behind the increasing gap in entrepreneurship between white and black males as they age by using a life cycle model of occupational choice. Hincapié began his talk with an explanation of the difference between genders that starts around the age 25 going until the age of 50 due to choice of fertility. Further various mechanisms that explain differences in entrepreneurship between Black and white males, including wealth, human capital, credit constraints, profitability, and discrimination, were identified early in the process and separated out by the data and life cycle model. The data used included life cycle observations from 1968 - 2015 on occupation, income, individual wealth, and demographics. Preliminary results found that the return on each dollar Black male entrepreneurs invest is about one-third of that for white males; there are lower returns in entrepreneurship for Black males result in highly educated Black males remaining in paid employment, where their human capital yields higher returns; and black male entrepreneurs are much more constrained due to lack of wealth. Anders concluded his lightning talk by explaining  that using the economic model allows researchers to discipline the data with economic theory, and the integration of data with the model helps researchers address concerns of selection and recover unbiased estimates.